As the changes in the sunlight according to the shifts of seasons change the day-to-day patterns that control an individual’s sense of time, some people consider it as a shift in their internal biological clock and this disturbance in the circadian rhythm can considerably disturb the mood. 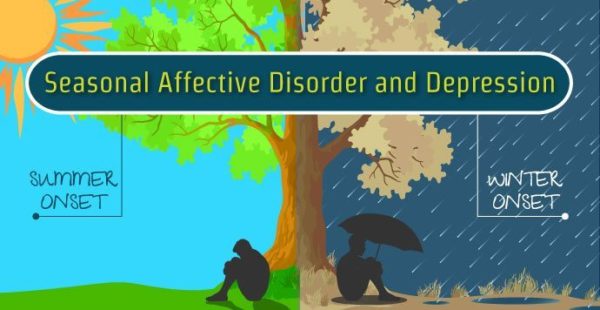 Seasonal Affective Disorder is four times more prevalent in women as compared to men and it is more likely to occur between 18 and 30 years of age. The people living farther away from the equator in the northern latitudes are most prone to develop SAD. It starts and ends almost at the same time every year.

People with SAD have trouble in the regulation of the hormone serotonin which is believed to be responsible for regulating moods and promoting positive and happier emotional states.

SAD can take place with other psychological disorders such as depression, bipolar disorder, attention deficit hyperactivity disorder, alcoholism, and eating disorders, making it difficult to be diagnosed.

Signs and symptoms of Seasonal affective disorder may include:

Symptoms linked with winter onset of Seasonal Affective Disorder include

Symptoms linked with the summer onset of (SAD)

In some individuals having bipolar disorder, spring and summer can give rise to the symptoms of mania or hypomania i.e. the less severe type of mania, and the seasons of winter and fall can be a period of depression.

Seasonal Affective Disorder is more commonly seen in younger people and Females. You can be at a higher risk of developing the condition if you:

Conditions occurring with (SAD) People having seasonal affective disorder might also go through other mental disorders, such as:

Changes in Biological clock: When somebody has a smaller amount of exposure to sunlight, their biological clock swings. This internal clock controls sleep, mood, and hormones, etc. When it changes, people may have trouble regulation their moods.

Imbalance of brain chemicals:  Neurotransmitters also called brain chemicals include serotonin hormone, which adds to the state of happy people having the risk of (SAD)

usually have less serotonin. As the sunlight regulates serotonin, lesser exposure to the sun in winter can make the situation to get worse.

Over-production of Melatonin: Melatonin is a hormone that affects sleep patterns. The lack of sunlight may lead to an overproduction of melatonin in some people which makes them sluggish and sleepy usually during winter.

Just like the other types of depression the (SAD) if left untreated can get worse and lead to different problems, which can include:

Physical exam: The doctor may perform a physical exam and assess your health through a detailed exam. As in some individuals, depression is associated with a physical health issue.

Lab tests: the health care provider may ask for a complete blood count (CBC) or test the thyroid to check if it is functioning properly or not.

Psychological assessment: For the evaluation of signs of depression, your doctor will ask about your thoughts, symptoms, feelings, and behavioral patterns.

DSM-5: Your Doctor may use the DSM-5 criteria for the diagnosis of seasonal depressive disorder mentioned in the Diagnostic and Statistical Manual of Mental Disorder by the American psychiatric association.

Seasonal affective disorder can be prevented by spending time outside the home on daily basis, even when it is cloudy out there. The effects of daylight are still very helpful. If it is too cold outside, you can open your window blinds and sit by a sunny window to get some of the effects of the sun.

Using a 10,000-lux light box during the fall season, even before the sensation of winter effects.

Exercising for 30 minutes every day, at least four to five times a week helps release endorphins, i.e. the happy hormones.

Anti-depressants: Anti-depressants are believed to be the most effective treatment if the affected individual starts taking them as the winter starts, even before the symptoms of the disorder begin to appear. These should be taken until spring.

Selective serotonin reuptake inhibitors (SSRIs): These are the chosen type of antidepressants for bringing in the happy hormones i.e. serotonin and help in treating Seasonal affective disorder.

Light therapy: Even a little walk in the sunlight can be helpful, try to get yourself exposed to the sun on daily basis and try to sit near windows when you are indoors.

Psychotherapy: Cognitive behavioral therapy (CBT) which is an individual therapy of self-help for Individuals having depressive symptoms.

The following additional activities can be used during the course of the entire acute (and follow-up) treatment of Seasonal Affective Disorder: